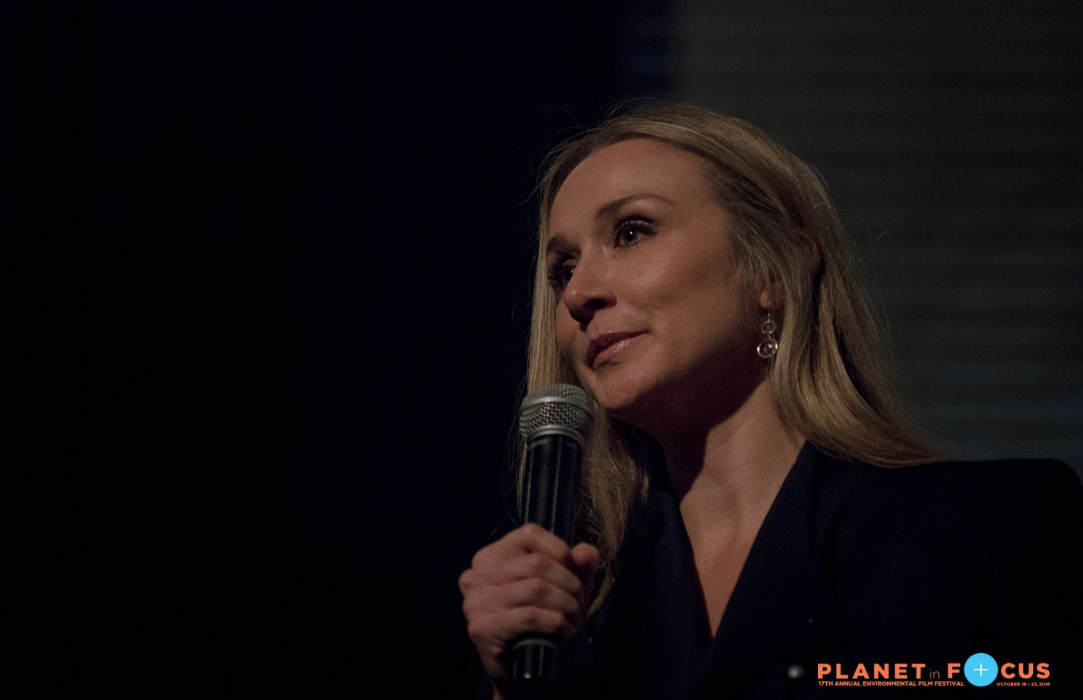 Filmmaker Alexandra Cousteau speaking at Planet in Focus in Toronto

During closing night at the Planet In Focus film festival in Toronto, the International Eco Hero Award was given to none other than filmmaker and water advocate Alexandra Cousteau.  The grandaughter of the legendary undersea explorer Jacques Cousteau and daughter to Phillipe, Alexandra has continued her family’s legacy of exploring our beautiful oceans.  Times have definitely changed since Jacques Cousteau has first set out in the oceans and he did not nearly experience the many issues and problems that his granddaughter Alexandra has faced today when it comes to conserving our oceans.  The senior adviser for Oceania is a true advocate and documentarian exploring the relationship between climate change and the oceans as well our current behaviour and attitude towards our water systems.

It has always been said that in order to solve some of the world’s biggest environmental problems is to think globally and act locally and you can see that Alexandra Cousteau is quietly spearheading this campaign.  Throughout the many miles she has trekked around the world, she has taken her conservation efforts through filming and exploring local water issues such as here in Toronto, Moncton, and Colorado.  Not as glamorous as her expeditions both her father and grandfather took but Alexandra Cousteau sees this as an opportunity to tell her story.  Her work in these films is to make everyone aware that there is a need to for a turning point to take place so that future generations will not be left with nothing in our oceans.  Sustainability is a great theory that will always be in question but there is a need to for many of us to be as passionate as Alexandra Cousteau about our oceans.

As she spoke to the audience after receiving her award that night, Alexandra Cousteau explained that she had just came back from the Philippines where she continued her efforts.  This became that much more inspiring because there are not too many who would set foot in this country especially now with all the political turmoil that is going on.   To welcome a non-native person to the country to discuss her interest in sustainable fisheries reforms and  stop illegal commercial fishing in the Philippines is raising the stakes pretty high.   But you can see that Alexandra Cousteau is certainly a risk -taker and doing whatever it takes by all means necessary to protect the oceans in this country.  Cousteau certainly believes in this area that the oceans are a resource for the people of the Philippines which is why conservation is necessary.  Just like many other areas in the world, the pollution and depletion of our waters and water systems becomes an unlikely resource to everyone.  When that happens as it is occurring now, times will severely tough.

What is unique about Alexandra Cousteau is that she has opened the door much more wider for environmental filmmakers old or new to tell their stories and to go every step of the way in doing so.  It’s great that someone like Ric O’ Barry of The Cove who at the end of his career has got many people around the world aware about what it happening to our oceans but it is individuals like Alexandra Cousteau who we all must support in the uphill and ongoing battle of the conservation of our oceans.  The more films that become available to us to remind us that everyone on this planet needs to do something, the better the chance we change our whole attitude, behaviour and practices towards the oceans.  You can hear her passion but at the same time her sadness about the treatment of our oceans but this is a testament of a person who is not telling a myth but cautionary tales.