Alexandra Cousteau on climate change, the oceans and not eating tuna 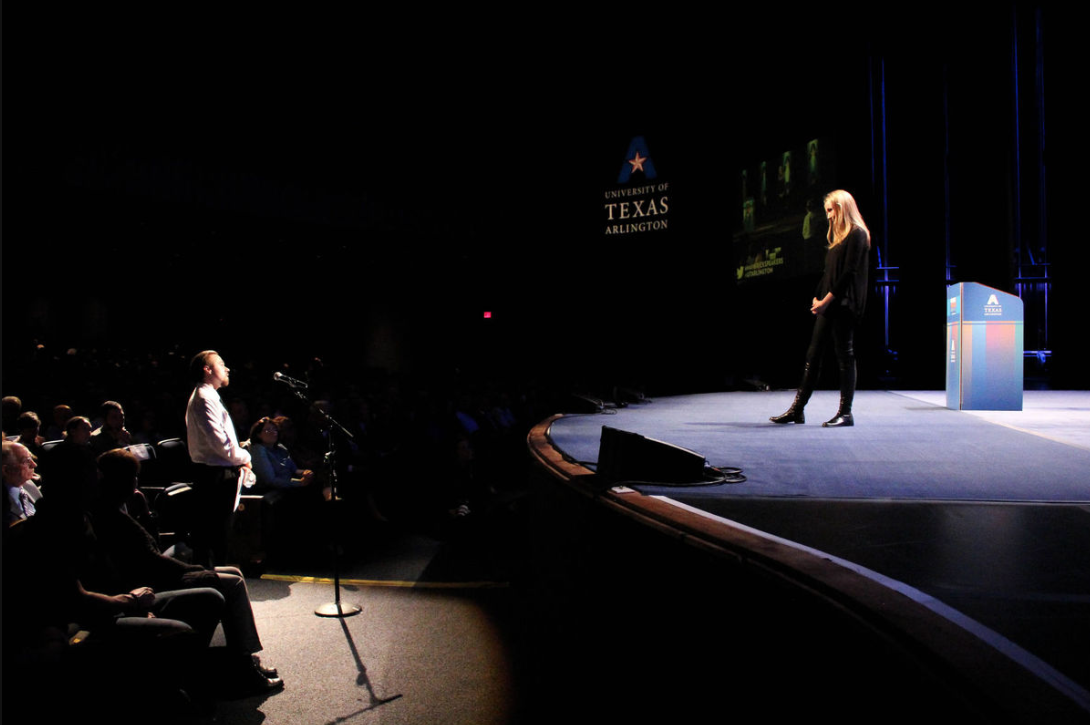 03 Nov 2016 Alexandra Cousteau on climate change, the oceans and not eating tuna

Environmentalist Alexandra Cousteau, granddaughter of famed explorer and documentary filmmaker Jacques Cousteau, is in town Thursday for a 7:30 p.m. speech and Q&A at the University of Texas at Arlington’s Maverick Speakers Series. Tickets are still available.

She’s planning to discuss — among other topics — her support for sustainability efforts and the fate of the oceans, which were an important part of her childhood. Her father, Philippe Cousteau, was also part of the family’s conservation dynasty.

She is an adviser to the environmental group Oceana , founder of Blue Legacy International, a 2010 World Economic Forum Young Global Leader and frequent speaker on all things water.

Here’s a few thoughts from the 40-year-old Berlin resident on her family, the state of the oceans and the unique attitudes about climate change in the United States.

On why people who don’t live near oceans should care about the oceans:

Cousteau: “When I look at the impact my grandfather’s films had, they inspired people all over the world, who lived on the ocean and who didn’t live on the ocean. There are so many ways for people to feel inspired and engaged about the oceans now. They might not be able to go to the ocean every day like people who live on a beach do. But I think that they can care. They can understand that rivers lead to the sea, so if you pollute the rivers, it’s going to end up in the seas. We should save the whales, even if you never see one in person. It’s still important. Or we shouldn’t eat seafood that’s on the brink of extinction. Eating a tuna is like eating a panda.”

On how the environmental landscape is different now than in the 1950s and ’60s when her grandfather came to prominence:

Cousteau: “People didn’t know what was under the surface of the ocean in the ’60s…It was brand new to them. It’s hard to imagine that today because we’re so used to it. But back then, it was a real novelty. For him [Jacques Cousteau], his most important contribution was creating that awareness and introducing people to what was there. Since my grandfather was born in 1910, we’ve added 6 billion people to the planet. The issues we’re facing today are much more urgent. And our window for addressing them is much smaller. … Our impact is widespread, from climate change and ocean acidification to deforestation.”

Her view of the ongoing debate about the existence of climate change:

Cousteau: “Americans are the only nation in the world that doubts it [climate change]. That’s kind of weird to me. You don’t hear that debate anywhere else [Cousteau got her college degree in the U.S. but now lives in Germany]. Certain stakeholders have very successfully politicized an issue that should not be political. Climate change should be an issue where we sit around the table and talk about what’s happening, talk about the impact that it will have on our homes and our prosperity and our future. … It’s highly politicized and people are so angry about it. I don’t understand it. The United States is a country that can mobilize and invent and imagine and create. … Change is going to happen whether we like it or not.”

On deciding to follow in what’s essentially the family business:

Cousteau: “I never really wondered what I was going to do with my life. … What did you like doing with your family when you were young? Fishing? Hiking? Camping? Whatever that was for you, that’s what this is for me. I just kept doing it. For me, I don’t really consider it a job. It’s part of who I am. These issues matter to me so much because the oceans of my childhood have disappeared. The oceans that we have today are fundamentally different than the oceans of the ’70s and 80s.”

On moving toward a more sustainable future:

Cousteau: “I don’t see it as asking people to sacrifice. I see it as asking people to invest the way we invest in our retirement, we invest in our children’s education, we invest in our home. Eating more sustainably or not leaving pesticides in your yards that will kill the pollinators or recycling, these aren’t sacrifices. I don’t think there’s a lot of people who just don’t care about the places where they live or the water and the land that shapes those places. Everybody cares about that. We’re just seeing it differently.”