End the US Shark-Fin Trade 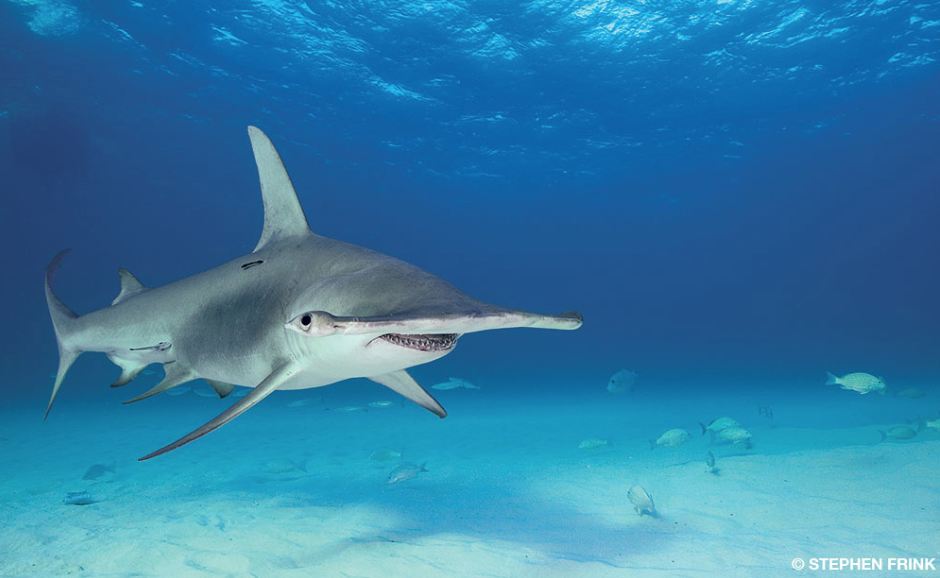 A bipartisan bill before Congress is poised to stop the sale of shark fins in the U.S.

I grew up in and around the sea, surrounded by pioneers of ocean exploration and conservation. If there’s one thing I learned from my experiences with my father, Philippe Cousteau, and my grandfather, Jacques­Yves Cousteau, it’s the interconnectedness of ocean life. Every creature has its place, and one group of creatures in particular plays a vital role in ocean ecosystems while also having a special place in divers’ hearts: sharks.

The joy of seeing these magnificent predators in their natural habitat, on their terms, is difficult to describe to someone who has not been lucky enough to experience such a moment. A shark’s graceful power can make you feel at once vulnerable and deeply privileged to be able to witness the beauty of this animal in its habitat. Seeing a shark while diving engenders a feeling of being a guest in its home.

This is why divers, more than anyone, should be outraged at the degrading, disgusting treatment of sharks. To satisfy a demand for shark­fin soup, sharks are hauled onto boats, where their fins are hacked off, and then their mutilated bodies are tossed back into the ocean, where they drown, bleed to death or are even eaten alive by other fish.

The conservation organization Oceana reports that up to 73 million sharks are killed in the shark-fin trade every year. This is a trade that needs to be stopped. To that end, Oceana has worked with lawmakers in congress to introduce the bipartisan Shark Fin Trade Elimination Act (S. 3095/H.R. 5584), with cosponsors Sens. Cory Booker (D-NJ) and Shelley Moore Capito (R-WV), and Reps. Gregorio Kilili Camacho Sablan (I-MP) and Ed Royce (R-CA). This bill would make the buying and selling of shark fins illegal in the United States. I urge legislators and citizens to do everything they can to ensure this bill passes.

The fin trade is one of the greatest threats to sharks worldwide. The act of shark finning is currently illegal in U.S. waters, and even though 11 states have passed shark­fin trade bans, fins are still being bought and sold in the United States. Once a fin is removed, it is impossible to know whether it came from a shark that was legally harvested for its meat or from a shark that was finned at sea.

A recent report on shark finning revealed large discrepancies in shark­fin trade data, with other countries reporting sending the U.S. more shark­fin products than the U.S. recorded importing. It is nearly impossible to know the true origin of any fin that enters or leaves the United States. Of the shark­fin products entering the U.S., more than 85 percent come from countries with no finning regulations in place. A 2006 study found that the 14 most common species involved in the Hong Kong fin trade (the historic leader in the global fin trade) were all near­threatened, vulnerable or endangered, according to the International Union for Conservation of Nature. So with no good way to know where a fin comes from, those entering the U.S. could be the product of a practice that is banned in U.S. waters, and worse, they may be the fins of sharks that are at risk of extinction.

An all­out trade ban would solve this problem. There would be no need to try to figure out whether a fin was hacked off a live, endangered shark, because no fins could be sold in the United States. We’re already employing this strategy for elephant ivory and rhino horns, and it’s time sharks received the same protection. Polls show that 8 in 10 Americans support a nationwide trade ban, and dozens of organizations such as Sierra Club and Sea Shepherd have declared support for the Shark Fin Trade Elimination Act. But for this bill to pass it needs all the support it can get, and I can’t think of a better standard bearer for this issue than the diving community.

As you all know, an ocean without sharks is an ocean out of balance. Sharks provide some of the most memorable moments in a diver’s career, but they also provide balance that is necessary for every population in any given ecosystem to thrive — from sea grasses to corals to fish. The abundance and biodiversity that we divers live for is dependent upon a healthy ocean, and a healthy ocean needs sharks — and sharks need you.

Please call and tell your members of congress to support this bill. I urge you to make this a central issue for the diving community. Watch the video at the link in the sidebar, and share this appeal with your friends and family.

Since my grandfather took his first scuba dive a little more than 70 years ago, sharks have been giving divers the ultimate thrill. Unfortunately, unless we act as a community, many of our favorite species may not make it another 70 years. Those moments of awe and wonder will become fewer and farther between. It’s time to end the buying and selling of shark fins in the United States, and it’s time for divers to stand up for a fish that has given us so much.

Watch the video at youtube.com/watch?v=IFzKH­O9WM0.