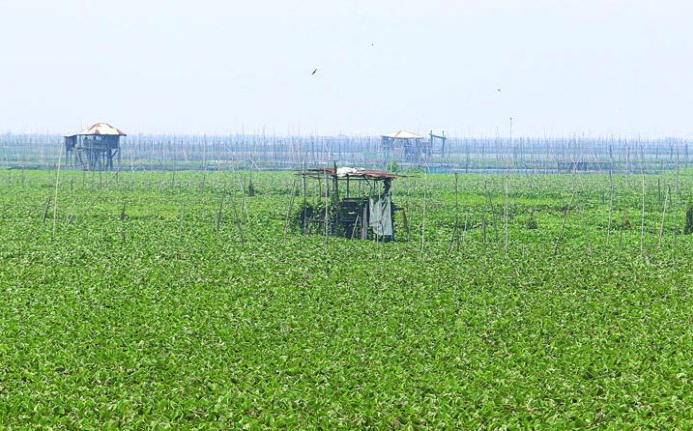 WHEN ocean explorer and filmmaker Alexandra Cousteau visited the Philippines in September last year, she told journalists the world’s oceans are in trouble. The Philippines, Cousteau said, is no exception.

She could not have described the situation any better.

The decades of neglect that led to ocean degradation in the Philippines, in fact, have already taken its toll on the fishery sector.

The dwindling fish catch of municipal fishermen—from an average of 10 kilos per day to just 5 kilos per day and/or lower—over the past decades pose a serious challenge.

Small fishermen confided that, because of the depleted fish stocks, they are forced to resort to destructive and unsustainable fishing practices—from blasting, or use of cyanide; use of trawl and unprescribed fish nets; and encroachment in marine-protected areas (MPAs), fish sanctuaries and spawning grounds, which are supposed to be “no-take” zones to cover for the high cost of production and make ends meet.

THE open ocean provides a wide range of goods and services essential to human development and survival.

Aside from the obvious ecosystem services that oceans provide, such as food and transportation, the phytoplankton in the ocean are estimated to produce over half the oxygen that many needs.

The ocean waters also have the capacity to absorb vast amounts of greenhouse gas that help buffer global warming.

The surface layer of the ocean absorbs over half the heat reaching the Earth from the sun.

“By distributing this heat around the world, ocean currents—which flow for thousands of kilometres, both at the surface and far below—are extremely important in determining the climate of the world’s continents,” the WWF said.

THE Philippines is composed of 7,641 islands and islets, with approximately266,000 sq km of coastal waters and bay areas, excluding the Philippine Rise, the country’s newest territory 250 km off Aurora Province.

The country is at the apex of the Coral Triangle, declared by scientists as “the center of the center of marine biodiversity in the world”.

The Coral Triangle, according to a broad scientific consensus, represents a global epicenter of marine life and abundance and diversity.

“Spanning only 1.6 percent of the planet’s oceans, the Coral Triangle region is home to the highest coral diversity in the world with 600 corals, or 76 percent, of the world’s known coral species. It contains the highest reef-fish diversity on the planet with 2,500, or 37 percent, of the world’s reef fish species concentrated in the area,” the Coral Triangle Initiative on Coral Reefs, Fisheries and Food Security web site said. “It is also a spawning and nursery ground for six species of threatened marine turtles, endangered fish and cetaceans, such as tuna and blue whales.”

The Philippines, along with Indonesia, Malaysia, Papua New Guinea, Solomon Islands and Timor Leste, known collectively as the CT6 (Coral Triangle 6), agreed to a adopt a 10-year regional plan of action to safeguard the region’s coastal and marine biological resources.

The Philippine reefs contribute approximately P1.35 billion to the national economy per year.

Many areas in the country continue to rake profit from ecotourism, showcasing its coastal and marine biodiversity, its white-sand beaches, lagoons and world-class diving spots, which attract both local and foreign tourists.

Having one of the richest coral and reef-fish diversity in the world puts the Philippines in a better
economic position than other countries within Southeast Asia. The Philippine Biodiversity Strategy and Action Plan (PBSAP) 2015 to 2028 placed the country’s ecosystem and biodiversity value at P2.3 trillion. The PBSAP added ecosystem services provided through fishery production is estimated to be worth P111 billion; coral reef, 62.1 billion; and mangrove, 7.4 billion.

MUCH of the country’s coastal and marine resources are already degraded. In Luzon the historic Manila Bayis dying because of pollution. Tons of garbage are washed along the shore.

The degradation of coastal and marine areas, such as in Manila Bay, was a result of a number of factors. The massive land reclamation or dump-and-fill along Manila Bay destroyed much of its coastal ecosystem—including mangroves, sea grass and corals—decades ago.

The indiscriminate dumping of garbage in Metro Manilahas already taken its toll, as uncollected garbage finds their way into waterways, eventually ending up either in Laguna de Bay or Manila Bay. The coast of Manila Bay is known to be notoriously dirty and contaminated withtoxic pollutants.

Water quality in Manila Bay’s shoreline did not improve much since the Supreme Court issued in 2008 a continuing mandamus ordering concerned government agencies to clean up and restore Manila Bay to its pristine state.

The latest laboratory test along the stretch of Manila Bay revealed high levels of coliform and faecal coliform. The fecal coliform is particularly worrisome, as they may carry pathogenic bacteria in fishes and can be harmful to humans when consumed, said Salvador Batellar of the Manila Bay Coordinating Office of the Environmental Management Bureau (EMB).

The current coliform level of the water in Manila Bay’s shoreline runs over a million most probable number (MPN) per 100 milliliters. This is way above the acceptable level of 100 MPN of coliform per 100 ml. This level allows authorities to declare fish caught in a particular water body safe for human consumption.

GLORIA Estenzo-Ramos, vice president of Oceana Philippines, an ocean conservation advocacy group, said she is saddened “to see only small fish underwater and some corals and sea grass smothered by sediments from land”.

Humans are getting more and faster from our ocean than it can regenerate, Estenzo-Ramos added.

“Overfishing, pollution, coastal developments and climate change are real threats to the health of the ocean and, of course, our survival,” she said.  An environmental lawyer, Ramos added the collapse of the country’s marine species and their interconnected habitats, like corals, sea grass and mangroves, is of our own doing.

“We should wake up, and take urgent action to restore its vitality and rebuild fisheries—Now!” she said. In a 2013 report, titled “Oceans in the Balance: Philippines in Focus”, Greenpeace noted that the Philippine seas are under threat—corals are dying, mangrove areas are being destroyed, sea-grass beds are being suffocated by erosion and vital populations of fish and other marine species are declining.

In fact, the report said the overall picture of the country’s oceans depicted the Philippines as a nation in crisis because of the various threats to its marine and coastal ecosystems.

On top of the massive damage to its coastal and marine ecosystem, the Philippine seas is becoming more and more polluted because of indiscriminate dumping of thrash into the ocean.