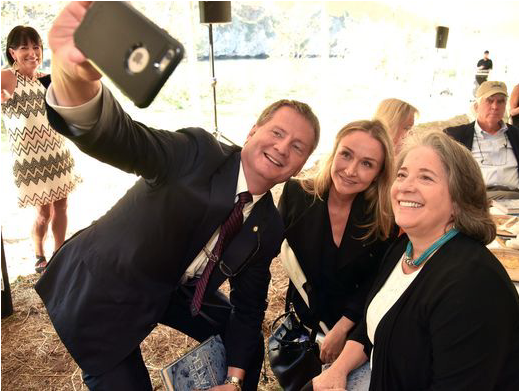 Alexandra Cousteau said she never had to make a decision to follow in her famous grandfather’s foot steps.

“It never really was a question,” she said. “It is kind of what we always did.”

Cousteau was the featured speaker at the Legacy Parks Foundation’s 11th annual Legacy Luncheon on Friday under a big white tent at the Seven Islands State Birding Park.

Cousteau, the granddaughter of famed nautical adventurer and conservationist Jacques-Yves Cousteau and daughter of Philippe Cousteau, travels the globe, much as they did, to promote stewardship of the oceans and other waterways.

She says she has been doing this since her grandfather pushed her into the ocean at age 7 on her first scuba diving adventure.

“I saw this school of silver fish all around me and I felt like I was in the middle of fireworks,” she said of that day. “I realized there was this whole new world to explore. It was a revolution at how I looked at the world and what I would inspire to do and how I found myself in this family business.”

She explained that her grandfather discovered in his journeys that the ocean life was being altered for the worse by pollution and other problems, and dedicated himself to fighting to protect it, starting the Cousteau Society.

“As I grew older traveling with my grandfather, I started seeing the beautiful places that I had known as a child were also disappearing,” she said. “I realized I didn’t want to be the third generation of my family who would continue to chronicle the loss of those places.”

She is a senior adviser with Oceana, the largest international advocacy organization focused solely on ocean conservation. She is on the advisory council for the Pacific Institute, a global water think tank that provides science-based thought leadership.

As a National Geographic Emerging Explorer and filmmaker, she continues to document issues that are destroying the world’s bodies of water.

She now has children of her own — a 6-year-old daughter and a 3-year-old son — and there is every indication that the Cousteau legacy of ocean conservation will continue.

“They are ocean lovers,” she said. “My daughter considers herself an explorer and an ocean saver.”

Legacy Foundation Executive Director Carol Evans took the occasion to make several announcements, including the acquisition of the 3-acre McBee Ferry Landing property on the Holston River. The land, which will become a county park, will include access to the river as part of Legacy’s Head of the Tennessee Initiative, an effort to provide more access to both the Holston and French Broad river, which connect to form the Tennessee.

Carol Evans, executive director of the Legacy Parks Foundation speaks about how the foundation is procuring a four-acre stretch along the Holston River off Old Strawberry Plains Pike for a Knox County park on Tuesday, June 20, 2017.

The property is off Andrew Johnson Highway on Old Strawberry Plains Pike.

“We are thrilled to create more public access to our East Tennessee waterways, and are looking forward to the community making great use of this amazing riverfront property and beautiful stretch of river,” Evans said.