Canada’s fisheries department and Alexandra Cousteau team up to explore the Gulf of St. Lawrence 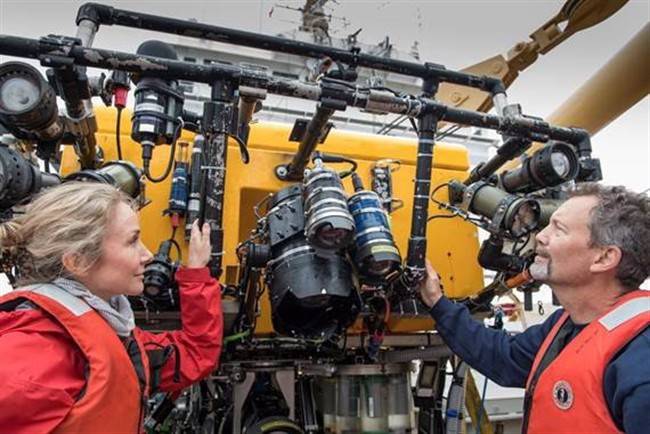 31 Aug 2017 Canada’s fisheries department and Alexandra Cousteau team up to explore the Gulf of St. Lawrence

A first of its kind expedition in Canada’s Gulf of St. Lawrence captured images, creatures and information never before observed by human eyes.

A joint venture between the Department of Fisheries and Oceans (DFO) and Oceana Canada, an independent charity that advocates for the conservation of oceans, the expedition used a remote-controlled submersible to plumb the Gulf’s inky depths.

The Remotely Operated Platform for Ocean Sciences (ROPOS), a $6-million submersible, allowed the crew to stream a high-definition feed that allowed the world to explore with them.

“The Gulf of St. Lawrence has never been explored with the type of technology we have,” Oceana’s science director, Robert Rangeley, said in an interview with The Canadian Press earlier this week.

“We were able to get first-of-a-kind footage of the seafloor in the (Gulf of St. Lawrence),” she told Global News on Thursday.

“It allowed us to be able to collect sponges and soft corals. And with the high-definition cameras on this incredible robot we were able to capture the interaction between species and the environment.”

It’s those kinds of opportunities — to discover the undiscovered — that led to the expedition.

Mireille Chiasson, a Senior Oceans Biologist with the DFO, says that planning of the mission took nearly a year and a half.

“We knew that Oceana had opened a chapter in Canada, they were looking to have an expedition in the Gulf of St. Lawrence and they reached out to Fisheries and Oceans to get the scientists to go on board with them,” she said.

As part of the partnership, the DFO was able to secure the use of the CCGS Martha L. Black, a light icebreaker to help transport the expedition.

Now that the expedition is over and the many samples collected and cataloged, Cousteau says now is the time when analysis begins.

Scientists from the DFO and Oceana will examine and investigate every frame of film and every piece of coral gathered over the next several months.

“We’ll be able to take that into consideration and issue recommendations for places that are in need of conservation. We’ll also provide policy makers with what they need to make decisions,” she said.”

The Gulf of St.Lawrence has been at the forefront of the discussion on conservation in North America due to the death of at least 10 North Atlantic Right Whales in its waters.

While not explicitly looking at whales during their expedition, Cousteau said it’s a great illustration of the need for more oceanographic study.

“We know more about the surface of the moon than our own oceans,” she said. “I think, just generally speaking, that the more we know about our oceans, the more we can understand what happens.”