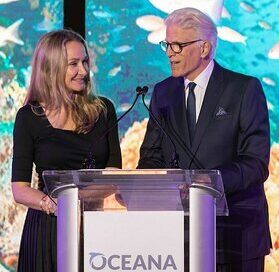 This year’s party was emceed by Oceana Board of Directors Vice-Chair Ted Danson and Oceana Senior Advisor Alexandra Cousteau and included an intimate performance by singer-songwriter Jackson Browne and his band.

More than 400 guests gathered at an exclusive hilltop estate in Laguna Beach, overlooking the majestic Pacific Ocean to celebrate the world’s oceans. More than $1.5 million was raised to benefit Oceana and local ocean conservation efforts.

This year’s benefit focused on the plague of ocean plastic pollution, addressing the enormous problem of single-use plastic pollution. Guests were reminded that 90 percent of all the plastic ever made has not been recycled, and that plastic production is expected to quadruple by 2050.
“In too many places, I no longer recognize the seas of my youth when I dive because there is so much plastic,” said Alexandra Cousteau. “I’ve seen things that my grandfather would consider a nightmare.”

SeaChange was co-chaired by Oceana Board Chair Valarie Van Cleave and Elizabeth Wahler and vice-chaired by Jeff Blasingame.
“I, like so many of us in this community, have seen first-hand the impacts of plastic on our beaches, coasts, and oceans,” said Elizabeth Wahler. “We clearly need to do something about this now.”

And there is reason for hope. “Oceana will win national laws mandating major reductions in throw away plastics,” said Oceana CEO Andy Sharpless. “We’ll get this done in the next five years.” Oceana has already helped secure policy victories to protect the oceans against plastic in Peru, Belize and Europe.

The program concluded with a performance from Jackson Browne and his band who sang songs including “Doctor My Eyes”, “Somebody’s Baby”, and “Running on Empty.”